Do you really understand the impact of Exponential Growth?

The information explosion we have seen in recent times will continue at the same rate indefinitely. You are undoubtedly aware of Moore’s Law, named after Gordon Moore, co-founder of Intel and co-inventor of the computer chip; according to Moore, computer processor and storage capacities will double every 18 months. This law has proved true since the 1950s. Because of this on-going growth, we can also double the amount of information stored every 18 months, resulting in ever-greater information overload with on one side, ever increasing information retrieval difficulties, and on the other, the development of new computer techniques to help us control this mountain of information.

An example of exponential growth is the number sequence:

which can be expressed in the function f(x) =  2x. Examples of exponential growth can be found in biology and finance respectively as the growth of population size or the growth of your bank account or loan, which adds interest every year onto the initial sum. 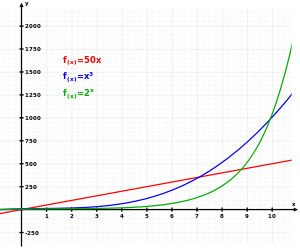 The Impact of Exponential Growth

There is an old fable explaining the impact of exponential growth, also used by Ray Kurzweil in his recent book The Singularity is near:

The wheat and chessboard problem (the problem is sometimes expressed in terms of rice instead of wheat) is a mathematical problem in the form of a word problem:

If a chessboard were to have wheat placed upon each square such that one grain were placed on the first square, two on the second, four on the third, and so on (doubling the number of grains on each subsequent square), how many grains of wheat would be on the chessboard at the finish?

On Wikipedia, we can find a description of this fable on exponential growth, when the creator of the game of chess (in some versions an ancient Indian mathematician, in others a legendary dravida vellalar named Sessa or Sissa) showed his invention to the ruler of the country, the ruler was so pleased that he gave the inventor the right to name his prize for the invention. The man, who was very wise, asked the king this: that for the first square of the chess board, he would receive one grain of wheat (in some tellings, rice), two for the second one, four on the third one, and so forth, doubling the amount each time. The ruler, arithmetically unaware, quickly accepted the inventor’s offer, even getting offended by his perceived notion that the inventor was asking for such a low price, and ordered the treasurer to count and hand over the wheat to the inventor. However, when the treasurer took more than a week to calculate the amount of wheat, the ruler asked him for a reason for his tardiness. The treasurer then gave him the result of the calculation, and explained that it would take more than all the assets of the kingdom to give the inventor the reward. The story ends with the inventor becoming the new king. (In other variations of the story the king punishes the inventor.)

Second half of the chessboard

In technology strategy, the second half of the chessboard is a phrase, coined by Ray Kurzweil, in reference to the point where an exponentially growing factor begins to have a significant economic impact on an organization’s overall business strategy. While the number of grains on the first half of the chessboard is large, the amount on the second half is vastly (232 > 4 billion times) larger.

The number of grains of rice on the second half of the chessboard is 232 + 233 + 234 … + 263, for a total of 264 − 232 grains of rice (the square of the number of grains on the first half of the board plus itself). Indeed, as each square contains one grain more than the total of all the squares before it, the first square of the second half alone contains more grains than the entire first half.

So, exponential growth really gets bad in the second half of the chess board. Today, Moore’s law has been in effect for 54 years. Doubling every 18 months (1.5 years) results to us being on field 35.3 just a little over half and somewhere between 34G and 68G, up to 137G.

It is now starting to get really getting bad and we are only just over half way across the board. In a few years from now, it will be much worse! This is what is happening with your data!

These days, computers and many other technologies are exponential, humans are not. This is where we see a lot of problems: humans cannot predict the effects of exponential growth or cannot deal with the effects of it: they are constantly surprised by its speed.

Understanding exponential growth is a first step into being able to prepare yourself!